I know it's summer, but I needed to think about fitting the heater, to use when this loverly weather finally disappears.I had an Eberspacher D2 airtronic waiting in the garage.This was bought secondhand on eBay.
It wasn't a complete kit, and I won't know wether it works untill it's fired up!
It is a blown air heater that draws diesel from the main tank and needs 12 volt power to fire it up.These heaters are used by lorry drivers and in boats,and use very little fuel.
I needed to buy a few bits before fitting. These were new fuel pipe,fuel pipe clips.Stand pipe for the fuel tank, some ducting and a fuse assembly.Next task was to decide where to fit it.Space in the middle of the van has disappeared due to relocation of batteries.I'll cover this later.So final resting place is under the bed.
After a lot of measuring inside and underneath, I marked up the holes and cut. The ebber came with a fitting kit which was used to mark up the exhaust and air intake holes.Also managed to download a PDF fitting/user manual from the interweb,it's made the whole job a lot easier!
Once fitted in position 6mm red and black cables where run under the shower room to the battery and the cables for the controller had to be extended, as I wanted to mount it on the other side of the shower room.
Next was probably the most daunting job, cutting a hole in the fuel tank!this was a 25mm diam hole for the standpipe.The fuel tank is plastic and actually thicker than I was expecting.I did use a brand new hole saw though.
Then it was just a matter of running the fuel pipe from the diesel tank, under the van, through the fuel pump to the ebber.There is also two cables from the pump to ebber to extend.

As its fitted under the bed I've buit a ply box around it.This is to protect it and if it's noisy then I can insulate the box.So that's were we are at the moment, next job is to add the ducting and see if it works! 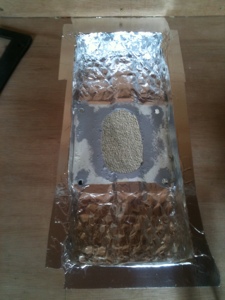 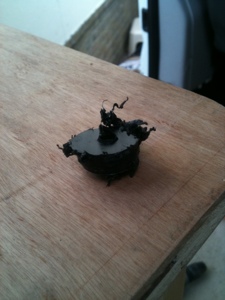 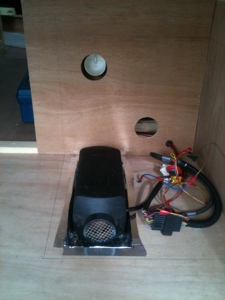 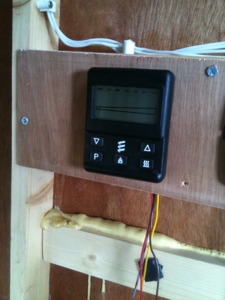 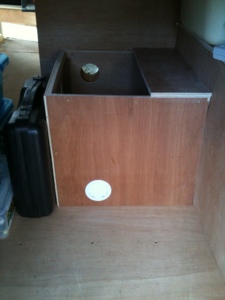 Hello! I've been busy in the van this week.the framework for the dinette seat has been made. In the base it houses the Truma boiler and the other side is going for the twin batteries.I'm moving the batteries here as I'm concerned about the weight under the drivers seat.

Also the floor has been raised behind the drivers seat, to make it the same level as in the cab.This is so that when the front seats are swivelled you don't get dangly leg syndrome!.I intend to utilise some of the space for storage and the invertor.

The seat needs a little finishing and some foam for the cushion and back rest. 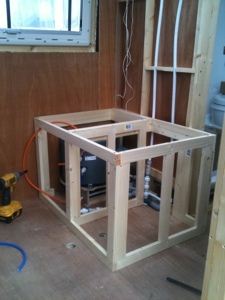 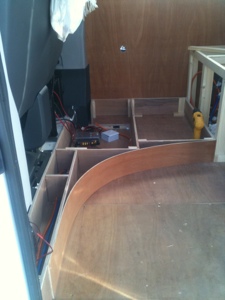 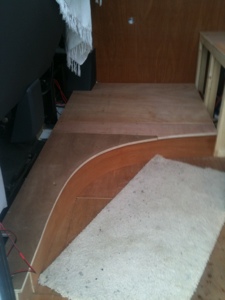 Hello there! The shower is now in situ and plumbed in.I've used JG speed fit fittings all the way up to the valve.A pair of copper/push fit wall plate elbows are used in the wall cavity to connect to the back of the valve.Still waiting to fit the gas filler pipe, but there seems to be a fitting missing, so can't fire up the boiler yet. 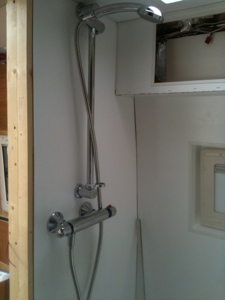 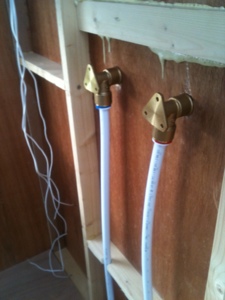 It's been raining here for two days now 😓,so as I can't work outside, I've been working in the van 😃.
The shower is now fitted and all pipework connected, but only cold water running at present.The cold supply has been tested to pressure and there's no leaks.
Cut out another gas drop out hole in the bottom of the kitchen unit.This is under the hob & grill and where the gas manifold is.
Also built the framework above the sliding door to host the switch panels and hide cable runs.This joins onto the wall cupboard above the sink, which is where all the crockery will go.I'll post some pictures tomorrow .

Stephen.
Posted by Stephen at 15:02 No comments:

Stephen
Sunny South Coast, United Kingdom
Hello campervan lovers! This blog is detailing the building of a bespoke travel van. I've been obsessed with camper vans for about eight years now ,and this is my second van.its being built for comfortable Wildcamping off grid.This blog will also feature Wildcamping trips in the uk and Europe.Hopefully it may contain some useful infomation and encouragement for anyone wanting to build their own van. Stephen.